Moore to the point / last page


The film was a huge commercial success.

“I made it for $160,000 and sold it to Warner Brothers for $3m. Why did they buy it? Because they’re in the business of making movies that people want to see.”

Moore plainly respects Warner: “They didn’t change anything. And they were willing to stand up to the motor company.”

In his films, and even occasionally over lunch, Moore can seem sweetly innocent.

With a pair of victims of the shootings at Columbine, one of them confined to a wheelchair, he travels to the headquarters of K-Mart.

The plan, devised by one of the young men, is to persuade K-Mart to cease selling the 17-cent, 9mm bullets that were used at Columbine.

Fobbed off initially by some public relations person, they return the following day with hordes of local media representatives – to receive the surprisingly gratifying news that K-Mart will cease to sell ammunition for all hand guns.

Moore blames gun culture on ordinary Americans’ excessive fear of each other – itself a consequence of over-the-top crime reporting.

Across the border in Canada, he has found, citizens trust each other: filming in Toronto, he goes from house to house opening front doors that are routinely left unlocked.


“Thank you for not shooting me”


…he says to one surprised householder.

Having drunk only half his Coke, he orders another, and some “corn soup”. Encouraged by his doctor, Moore – a large man – has recently lost 10lb. “But I have cut nothing out,” he says.

“The reason diets don’t work is that you deny yourself and go mad with the craving. ‘I’m never going to eat French fries again’ – that’s bullshit. In the last month or two, I have decided to eat only half of what is on the plate.”

Today, exceptionally, that’s not necessary. Moore picks up the tiny dish before him and at last I understand why he’s been playing with it.

(Note to Hakkasan: try fitting that into your marketing.)

Like Swift – and another of his heroes, Chaplin – Moore uses humour to express ideas that are profoundly angry.

“Humour is one of the most effective lessons to raise people’s consciousness. There is a great quote from Twain: ‘Against an assault of laughter, nothing can stand.’

Once the entire country gets laughing at Nixon – or Blair – it’s over.” Or George W. Bush, a politician he deplores and constantly ridicules.

Or Charlton Heston, whose tireless lobbying for the gun lobby long ago eclipsed his film work.

Shortly after the Columbine massacre, Heston pitched up in town – expressly against the wishes of the local community – to promote the National Rifle Association.

He does the same, later, after a six-year-old boy shoots dead a classmate in Moore’s native town, Flint; and this provides a powerful preliminary to one of the most impressive parts of the film.

Moore had tried for years to get Heston into his films – adding another credit to the list that includes El Cid, Planet of the Apes and The Ten Commandments.

One day, on the way towards Los Angeles airport, somebody on Moore’s crew suggested buying a map showing the homes of the famous and looking up Heston’s address.

“I wanted to go to the airport,” he confesses.

“But everybody else wanted to do it. So we drive to the place on the map. I was sure it wasn’t the place. I didn’t even bother to clean the windshield for the camera. But I go to the gate and say, ‘Mr Heston?’ and out comes this voice, ‘Yeees . . . ?’

Amazingly, Heston let him in. 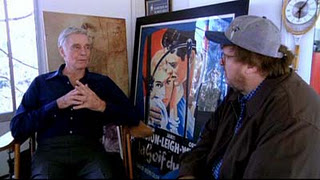 But to reveal why he abandons the interview – and how Moore responds – would spoil the film.

Anyway, we’ve run out of time. Moore’s PR returns to take him away. Looking down at the table, he conducts a swift audit: “Let’s see, how has Mike done?”

The plate is clean, but both his Cokes remain half-full.

“Hey, whatever gets you there, man,” he says, then heads back through the dark to his foo-foo hotel.